The Providence has 2 Control Bridges which makes it quite an impressive design for such a large ship.

The 1st Control Bridge is located in the front of the ship. There are 2 models of the Providence-class carrier's bridge. The original Bridge model contains 10 Driver Battle Droids or OOM Pilot Droids manning the ship. The 2 Droids in the front drive the ship, while the others fired its weapons and unlocked doors. It contains 1 chair for a Tactical Droid, Super Tactical Droid, or a OOM Commander Battle Droid to sit in it. Sometimes, they carry biological officers, such as Trench.

The Providence's 2nd control bridge is much smaller than the first. It only has 6 OOM Security Battle Droids manning it and still has 1 chair for the T-series tactical droids. The 2nd Control Bridge also has point-defense laser cannons protecting the front and the back.

The Last of the DroidsEdit 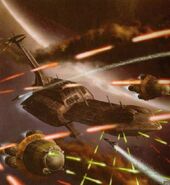 Add a photo to this gallery
Retrieved from "https://thelastofthedroids.fandom.com/wiki/Providence-class_carrier/destroyer?oldid=18616"
Community content is available under CC-BY-SA unless otherwise noted.